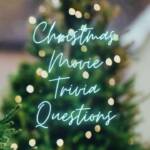 Christmas movies are some of the most looked forward to events of the season. Some of us can quote a few of them word by word. But how well do you know the most popular classic Christmas films?

Whether you need some entertainment for an upcoming Christmas party or you just want to quiz yourself and your knowledge of all things Christmas movies, check out the Christmas trivia questions with answers below!

From Elf to Miracle on 34th Street, we have information to test your expertise in all of the classics. Need a refresher? Click the link to purchase or rent the film and come back after to try again!

How the Grinch Stole Christmas

Mickey’s Once Upon a Christmas

Movie nights are extra special during the holidays. So get cozy with Christmas cookies, popcorn and candy canes.

And test your knowledge with these Christmas movie trivia questions to see how much you pay attention (or don’t!) when watching the most iconic films from years past!

As you read through the lists above, how many holiday movie trivia questions did you get right? How many movies did you need a refresher on? Take the time to rewatch the classics and then come back again to check your scores on our Christmas movie quiz!