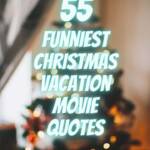 There's nothing like a family vacation, unless it's with the Griswolds. In honor of the holiday tradition, here are the funniest Christmas vacation quotes from Cousin Eddie, Clark and the whole gang.

If you're a fan of the 1989 holiday movie classic National Lampoon's Christmas Vacation (and the sequel), you're probably quoting it this time of year.

So pour some eggnog and grab some Christmas cookies while you read through these memorable quotes.

And if you love holiday movies, check our these 125 Christmas movie trivia questions!

Here are the funniest, craziest and sometimes unbelievable things said by Cousin Eddie, Clark, Ellen, and the rest of the whacky Griswold clan.

Randy Quaid steals the show as Cousin Eddie who comes to stay with Clark Griswold's family as they celebrates Christmas in retro comedy style.

Chevy Chase is unforgettable as Clark, hapless husband, father and the head of the Griswold family. Here are some of the classic lines he made famous including Clark's epic rant about his boss.

Hilarious Quotes from the Rest of the Family

From Beverly D'Angelo as Clark's wife Ellen to Juliette Lewis as Audrey, the rest of the cast is hilarious as the extended Griswold family. The kids and grandparents will have you rolling on the floor with these funny lines.

Love the movie? Celebrate with your favorite quotes on Christmas pajamas, t-shirts, and other great holiday gifts!

Whether you choose a "You serious Clark?" shirt or a mug with Clark's speech, you'll have the whole family laughing.